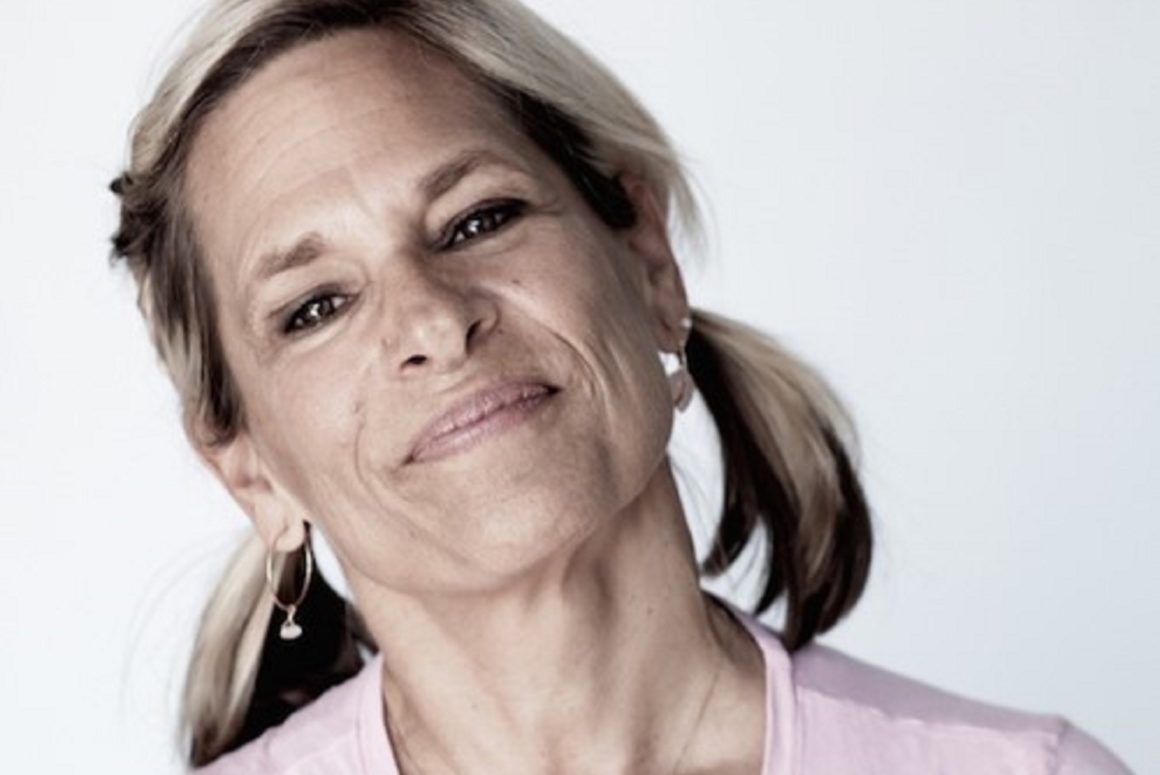 Britton has trained as a dancer, competed in extreme sports and spent two decades writing for some of New York’s most famous magazines. But it was her creation of Applied Yoga Treatments, a breath, body, mind approach to her own pain more than 20 years ago that changed the course of her career and her life.

Her clients range from amateur and professional athletes to teenagers to the elderly. She has over 5,000 hours of training in yoga, yoga therapeutics, philosophy and meditation. Her approach is more Indian that American in that she has studied with three different teachers over a period of 20 years, rather than just attending a lot of classes with a multitude of teachers. This May, Britton will graduate with a masters = degree in yoga scholarship and therapy from Loyola Marymount University in Los Angeles.

She’s also the founder of 11th Step Yoga, the only Alcoholics Anonymous-sanctioned 12-step program with a yoga format that focuses on postures, meditation and breathing specific to the disease of addiction and alcoholism.

“Everything I do is centered around how can we get you to a place where your body can function optimally to recover from any negative condition,” she said. “So recovery is my jam.”

Britton, who also suffers from degenerative arthritis and an autoimmune condition, has now turned her attention to the patients at Attune Health. Her Applied Yoga Treatment sessions are yet another part of the clinic’s whole body treatment approach which combines traditional medicine with nutrition plans, exercise programs and mindfulness training.

“I allow patients to get relief from pain so that they can actually figure out for themselves with Dr. Venuturupalli the optimal treatment path,” Britton said. “I’ve lived with chronic pain — it’s impossible to make good decisions about your wellbeing.”

Learn more about Applied Yoga Treatment in this Q & A with Abbie Britton:

Where did you get your love of exercise and why is it so important?

I’ve always been an athlete. My uncle put me on a horse when I was three. It’s just what we do in our family. We move, we’re outdoor people. We’re very much body first. My mother still hikes at the age of 90. She’s practiced yoga for 50 years.

It’s always been my stance, and who knows why, to consider matter over mind than mind over matter. I think the body is a completely underrated healing vehicle. I have a real stance that if you can get your body functioning optimally, the brain and the thought processes work themselves out.

Over the course of my amateur athletic career I never was able to find doctors who I felt were going to treat me optimally. They always said, “Don’t move and take these meds.” When I was 22 and I got sober, I started studying with some of the world’s top masters in healing.

I believe that we have the capacity to heal from just about anything. As a person who’s had injuries and who has an expertise in fixing people, I feel it’s my job to help people find a way to take responsibility for their own healing. I give people the tools to use the medicine they already have: Breath, positive thinking, optimal moving.

I also have degenerative arthritis and an autoimmune condition. I live pain free today and it’s because of all the work I’ve done on movement and food and hormones, those are the three things I think are key.

How did you get into yoga?

I was very late to yoga. I had no interest in it. Then about 20 years ago, I had a crush on this yoga teacher. He kind of had a crush on me and he said if we’re going to date you need to go to someone else’s yoga class. I went to this other yoga class and I was like, “Oh my god, they are speaking my language.” I never dated him but I stayed in the yoga.

I did my first 100 hours of training in a therapeutic lineage called Anusara. It’s based on the alignment expertise of BKS Iyengar and TKV Krishnamacharya—both whom taught a highly therapeutic method which says this: Start where you are. 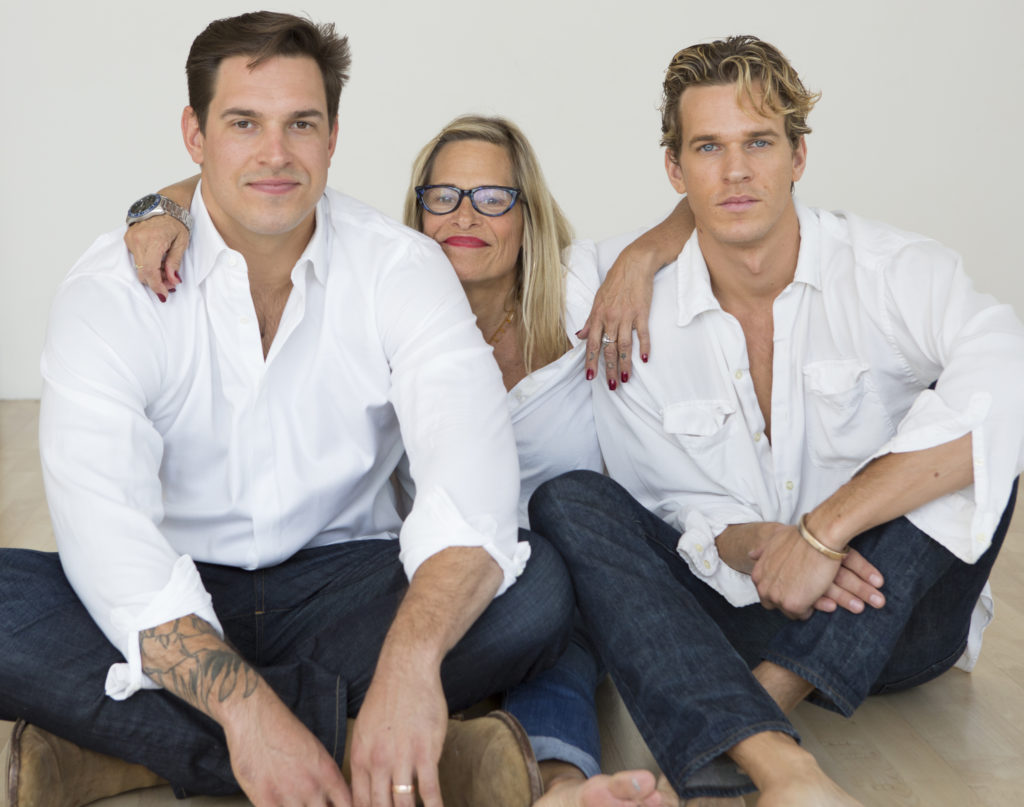 Abbie Britton with her sons.

How does therapeutic yoga at Attune Health differ from yoga you’d do at home or in a gym?

It’s not postures that you’d do on your own. It’s applied. I put the body in the positions that will be optimal Say, if they need to produce more serotonin — and who doesn’t — I’ll put the body into a twist or compression. If I twisted the legs to the right, I’d have them breathe into the left lung lobe. It’s a posture with breath direction that I’m applying to the body.

It’s very different than getting on a mat. And many of the patients can’t get on the floor, on a mat. So I do the yoga either sitting up on a table or literally laying down, and I’ll put the body in the position that they need it to be in.

The session is always accompanied by meditation and pranayama.

What do you tell clients who say they aren’t flexible enough to do yoga?

At Attune Health, we do an assessment. I’m a gait specialist. You can walk toward me just 10 feet and I can see where your alignment is off. I delve into the core of what is really going on as most pain has a stress related component, whether it is upcoming surgery, a relationship not working out, post trauma, a past surgery etc. We dig deep. The work begins with a relationship that is honest. Then I put you on the table and I work manually. I move your body in such a way that your joints relax, your tendons relax, even your ligaments and cartilage relax, because those are living tissues. I soften the body with my hands using a technique called bone rolling, which is specifically mine. Then I’m able to align the bones.

While I’m doing this, I do applied breath work. For example I’ll put my hands on your belly and your chest and direct you to breathe there. Without breath there is no yoga. Then I do a version of something called Open Focus Meditation which was developed by Les Fehmi. I studied with him for years in New York on this technique, which I use to reduce my own pain. I also guide a visualization of spaciousness in the body while the patient is on the table. And then I have patient do something which is really phenomenal, which is visualize themselves and how it would feel to be pain free and well.

Yeah, it’s pretty amazing. The technique of applied yoga treatment is something that I developed over the years working on hundreds of athletes and just regular people who needed relief. Basically just people who needed help with the pain in their bodies. Everybody wants to feel “right.”

How soon can patients expect to see results of Applied Yoga Treatment?

You get results immediately,  however, pain reduction is about committing to anti-inflammatory food and other treatments which is why I went to Attune Health because Attune doesn’t view pain through a lens of “it’s just pain.” They really understand it as a complex situation that needs to be treated from a number of different angles.

For more information about applied yoga treatment or to schedule an appointment with Abbie Britton, please call us at 310-652-0010.